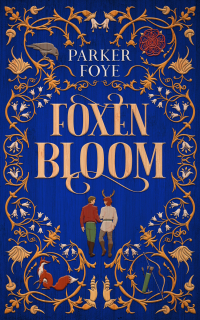 Today sees the release of FOXEN BLOOM, a queer fantasy romance about magic, hope, and eating your enemies.

The deal: Fenton will save Prior’s sister, providing Prior helps kill Fenton’s sibling in turn.

Except (naturally) it gets a bit more complicated than that… Draw your curtains, pour yourself a beverage, and get ready: THE BURIAL CLUB is available now!

The Burial Club is the second story from Love Has Claws, a series connected by the odd little town of Lastings. In this story we take to the city to meet Aggy Stephenson, a Lastings boy, and Laurel St. John, the vampire who loves him. (The first story is Nine Years of Silver.)

I really enjoyed writing this story! I’ve been thinking of it as gothic-adjacent with a high ‘perfectly compatible numpties’ content. Also: vampires! I hope you enjoy it, too. 🙂

Aggy Stephenson is a funeral bidder, hand-delivering invitations to funerals in the latest fashion among city elite. His work takes him to the house of Laurel St. John, a man as handsome as he is rich, and as frequently bereaved. Despite the circumstances of their meeting, Aggy quickly falls for Laurel’s strange thrall. But they stand on either side of a barrier: wealth, status—and death.

Dilettante, socialite, and vampire, little surprises Laurel—until he meets Aggy. But Laurel isn’t the only creature with his eye on Aggy, and not everyone is restricted to hunting at night. When Aggy misses a delivery, Laurel wonders if his love has tired of a life of darkness. Then Aggy’s name appears on the list of the nearly departed intended for Laurel’s plate, and the sun isn’t enough to stop Laurel’s wrath.

Can Aggy and Laurel keep walking the thin line between the living and the dead? Or will the city force them to choose between existence—and each other?